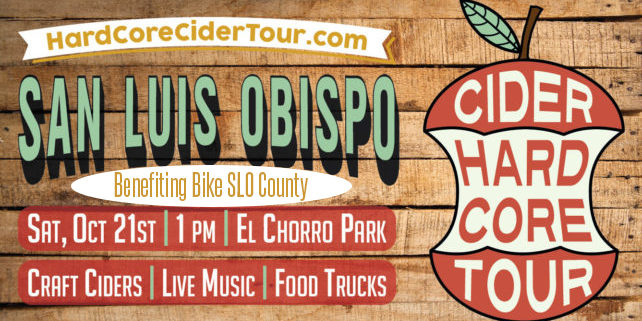 The Hard Core Cider Tour, which brings together some of the world’s top craft hard cider makers, is returning to San Luis Obispo’s El Chorro Regional Park on Saturday October 21st. Tickets are available through Bike SLO County and we benefit from this annual event.

The Hard Core Cider Tour’s mission is to celebrate the revival of craft hard cider making. As one of America’s long lost alcoholic beverages, the Tour strives to reintroduce the joy of imbibing hard cider to all!

*NEW THIS YEAR*: Purchase your favorite bottles to take home at the Cider Store Tent!

Tickets are $40 online or at the Bike Kitchen ($50 at the door). There are also group rate tickets for groups of four or more for $30 a ticket. Designated Driver tickets will be available for $10 at the door.

Parking: Riding your bike? Our free Free Bike Valet will be there to watch your bicycle during the event. Limited Automobile Parking will be available on-site. There will be a $5 Cash Only Parking Fee.

Ciders to enjoy at the event:

Like cider? We’re excited to announce that on October 22nd, The Hard Core Cider Tour is coming to El Chorro Regional Park and Bike SLO County will benefit from every ticket sold. If you like bikes and cider, this is a win – win! You’ll get to taste some of the best ciders around and contribute to the future of better paths and safer streets throughout SLO County.

The Hard Core Cider Tour’s mission is to celebrate the revival of craft hard cider making. The tour began in 2015 with stops in Santa Cruz and Pasadena and the 2016 tour adds a stop in San Luis Obispo. 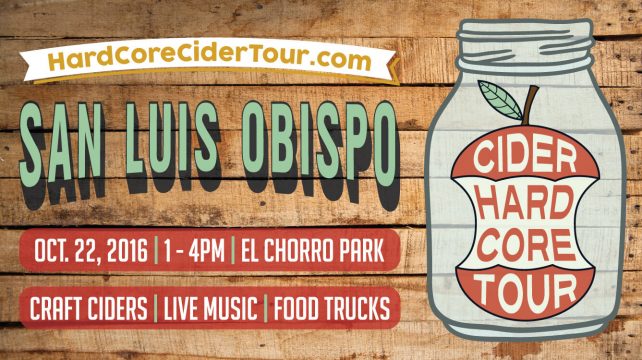 In addition to the cider producers mentioned above, the tour will include cider from other parts of California, Washington state and from as far away as Herefordshire, England.

Food will be available from two tasty food trucks, Cubanissimo and The Pairing Knife. To make the Festival even better there will be live music, with performances by Bear Market Riot and Medicine Hat.

While car parking will be available for $5.00, our Bike Valet will be on hand to park your bicycle for free!

Tickets are $40 and include unlimited 2 ounce tastings (please imbibe responsibly) and a signature keepsake mason jar. All ticket sales to the Hard Core Cider Tour benefit Bike SLO County, but some ticket sales benefit us more than others. Here’s how it works:

To purchase tickets at the Bike Kitchen: Come by Friday, Saturday or Sunday between the hours of Noon – 5 PM. We’re located at 860 Pacific St, San Luis Obispo, 93401 (map).

Want to purchase a ticket from us but those hours aren’t ideal? Call Steve at 547-2055 and we’ll do what we can to work with your schedule.