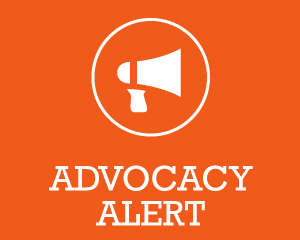 We need you to ask both chambers of Congress to save our streets.

The current Senate transportation bill is a serious threat to biking and walking programs. To improve it, we’re asking our senators to vote for the Cardin-Cochran amendment, this will give local governments the freedom to build sidewalks, crosswalks, and bikeways that keep people safe.

In the House, we are asking representatives to oppose the House transportation bill. Despite the fact that walking and bicycling infrastructure is a low-cost investment that creates more jobs per dollar than any other kind of highway spending, the House bill eliminates dedicated funding for walking and biking.

Contact our leaders TODAY and tell them how important dedicated funding for biking and walking is to you and our future.

On the other side of Congress, the House is considering a transportation bill (HR 7) that reverses 20 years of progress in making streets safer for people. Despite the fact that walking and biking make up 12% of trips but receive only 1.5% of federal funding, the House bill eliminates dedicated funding for walking and biking. It’s time to defeat this bill.

Congress needs to know that that finding effective, efficient transportation solutions to keep people safe on the streets should be a national priority.

It’s so much worse than we thought… Today, the House released its transportation bill, the American Energy and Infrastructure Act.

Last week, we knew the bill would be bad news for biking and walking. But we didn’t think it would go so far as to completely remove every reference to bicycling and walking in the federal transportation policy. Despite making up about 1% of federal funding and over 13% of fatalities, it’s on the chopping block…

House leadership is pressing to eliminate bicycling and walking in the transportation bill:

But we can still save biking and walking in this bill!

The benefits of biking and walking extend into all aspects of everyone’s life:

After the bill is out of the Transportation & Infrastructure Committee this week, hopefully with some amendments to reinstate bike-ped programs, we will need everyone to contact your Representative before it goes to the House floor for a vote!

If we lose here, we risk losing decades of progress. We know we are asking a lot of you and we thank you for all you’re doing to preserve biking and walking. Tell your friends!

Contact your Representative to ask them to support biking & walking via BikeLeague.org

Bicycle and Pedestrian Funding under Attack AGAIN, Contact your Senators to Save Transportation Enhancements Funding

It’s happening again… Just one month ago, Sen. Coburn (R-OK) failed in his efforts to strip funding for Transportation Enhancements from the six-month transportation extension.

Send an email to your Senators now to ask them to vote against the Paul amendment that would eliminate Transportation Enhancements. We agree on the need to keep our bridges safe, but the lives of pedestrians and cyclists are important too.

If Sen. Paul’s amendment succeeds, it would eliminate $700 million in federal funding in 2012 that is used to construct sidewalks, bike lanes, bike paths, trails and other infrastructure that makes our roads safer for bicyclists and pedestrians. Even if every penny of these funds is actually diverted to bridge repairs, Senator Paul’s plan will still take 80 years to fix the backlog of bridge repairs we have today. Keep in mind that:

If the Paul amendment succeeds, it will make it much more challenging to sustain funding for TE, Safe Routes to School, and Recreational Trails in the long-term transportation bill that the Environment and Public Works Committee starts debating just 8 days later on November 9.

We must turn back any amendment to strip Transportation Enhancements.  Last month, more than 75,000 messages were sent to Senators to ask them to stand strong for TE. That was an amazing turnout, but we must do better this time. Every time someone in Congress attacks bicycling and walking, we must push back even stronger. And, we will keep doing it until bicycle and pedestrian funding is protected.

This is the third time in a month that a few Senators have targeted Transportation Enhancements, using a different angle each time. It is a waste of the Senate’s time and taxpayer dollars to focus on this small and valuable program when we are in dire need of real and viable solutions to fix our failing transportation system.

Please contact your Senators today to ask them to vote against the Paul amendment (SA-821) to eliminate Transportation Enhancements.

And then forward this message to five others who care about the safety of people walking and bicycling on our streets. Thanks for your help, and for passing this along.