Hot August Bikes is back and HOTTER than ever!

If you missed last year’s first ever Hot August Bikes, you might be asking “Hot August whut”? If you attended last year, you already know it’s like a vintage car show but with AWESOME BIKES instead! We’re happy to announce that the Central Coast’s only summertime bike show is returning to Central Coast Brew on Saturday, August 17. 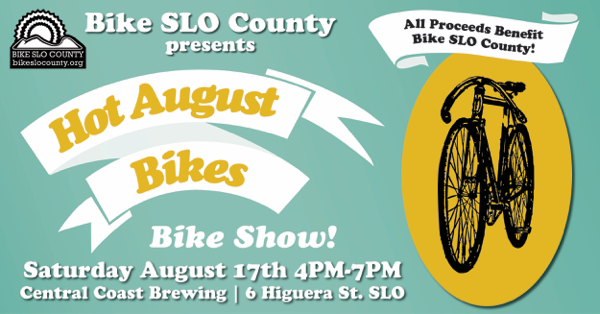 Come to look or enter to win!

You can come just to enjoy a beer while you gaze in awe at all of the amazing two-wheeled wonders, or you can enter your bike in the competition and maybe win all the glory! General audience admission & participation (you get to vote for the Audience Favorite award) is only $5 at the door.

Entering a bike in the competition? Space is limited! Please Pre-Register your bike by 11pm on Wednesday, August 14, it’s only $10! Register at http://bit.ly/HotAugustBikes2019

Day-of bike registration is $20, and is limited to 15 spots!

Our guest judges will award prizes for the best in five categories:

DIY – From tall bikes to home-brewed cargo bikes
DAILY DRIVER – Show us your commuter bikes!
VINTAGE I – Classics from 1987 or EARLIER – Eroica pretty bikes, classic cruisers, etc.
VINTAGE II – Any sweet bike from 1988-2000
TOURING BIKES – decked out in all of their touring glory

There will also be a prize for the bike chosen as the Audience Favorite.

Please RSVP here on Facebook and watch this space for info about raffle prizes, sponsors and more! 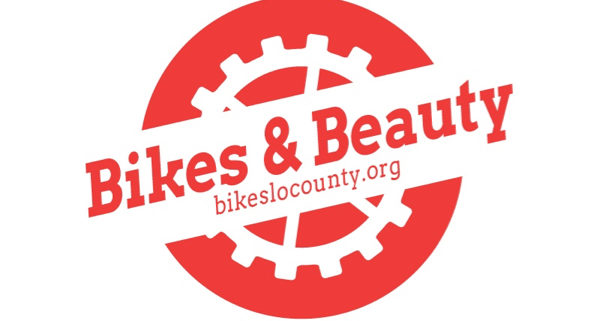 If you attend one event during Bike Month it should be the Bikes & Beauty 2018 Fashion Show at the Bike to Work Day After Party on Friday, May 18 from 6 – 9 PM at the SLO Guild Hall (map). 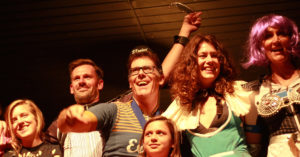 People from all over SLO County come together to watch members of our local bike community strut their stuff on the runway in an always amazing array of hand-made DIY bike fashion. Many of the items worn in the fashion show will be available for purchase after the show! 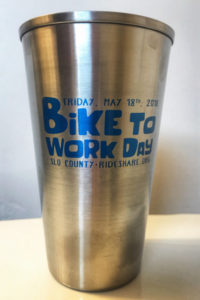 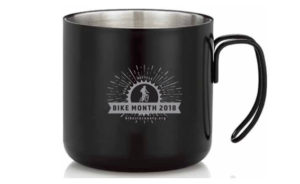 The last of our limited edition double walled Bike Month 2018 coffee mugs will be available for purchase for $10. These are a one-time run so when they’re gone they’re gone!

This event would not be possible without major support from Rideshare. Thank you! Additional funding from Sunrun and Mindbody help make Bikes & Beauty 2018 even better! 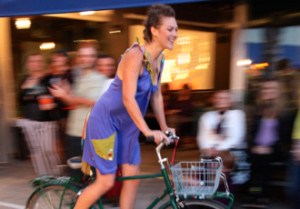 Rideshare will be giving away a Linus Commuter Bike. How can you win? Stop at any Bike to Work Day Station, collect a raffle ticket and bring it to the Bikes & Beauty Bike Month Blow Out for your chance to win!

Bike SLO County will raffle a fantastic Yuba Spicy Curry eCargo Bike (courtesy of Foothill Cyclery)! Whether you’re hauling coconuts, kids or kombucha, Spicy Curry is your jam! Retail for this bike is $4,200. Raffle tickets are $20 each or 5 for $100, available ONLY at Bikes & Beauty.

Parking at The SLO Grange Hall (map): Our free Bike Valet will be parking bikes from 6:15-9:30 PM, and there is also plenty of parking for cars

Very special thanks to the bike-loving sponsors who make this night possible: 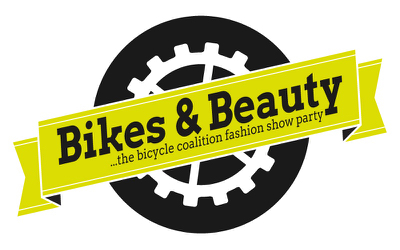 A Fun-filled Night Out with the Bike Community

Get ready for Bikes & Beauty, our annual celebration for people who love bicycles. Tell your friends! Bring your friends! Dress up fancy! Dress up fun! Enjoy a fun-filled night out with the bike community!

This year marks the return of the Bike Fashion Show,

In addition to the Fashion Show, we’ll have the sonic sounds of music spun by DJ Malik, fantastic food by Mee Heng Low, delicious desserts by Linnaea’s Cafe, award-winning wines by Peloton Cellars, a wide selection of locally brewed beer by Bang The Drum, Barellhouse Brewing Co and Central Coast Brewing and kombucha from Komplete Kombucha.

Tickets at the door: $5 for Bicycle Coalition Members. $10 for General Public. Each admission ticket is redeemable for one free beverage.

Become a member of The Bike Coalition – it’s free to sign-up and we’ll keep you informed every month about bike events and issues in SLO County. Click this link to join: I Like Bikes!

Fill out my online form.

From our talented photographer Brittany App! View even more on our Facebook page here.

We are halfway through with May’s Bike Month and our Bikes & Beauty Fashion Show is just around the corner!
To celebrate, we are offering $10.00 off memberships until Sunday May 19th at noon by using coupon code BIKEMONTH on the special form below.

By joining today you will promptly receive your membership packet in the mail – complete with an exclusive invitation to the Bikes & Beauty Fashion Show on June 1st. Have your friends join as well to be a part of the fun at this unique and creative event!

Note: We’re sorry, this coupon code is no longer valid.

The coupon code may have expired, but your Bicycle Coalition is still out there doing goo in our communities everyday! Join online here for your invite to Bikes & Beauty! 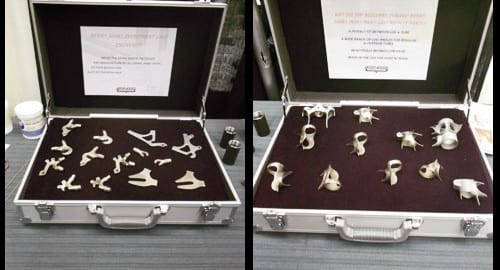 A recap of the annual event, courtesy of one our Coalition members, Matt Pierle:

If you weren’t lucky enough to make it to the Sacramento Convention Center on March 2nd-4th for the 2012 North American Handmade Bike Show (NAHBS) you missed an exciting gathering. Well represented were custom frame and bike builders as well as accessory manufacturers from the West Coast to the East, from the U.S. and Canada to Italy, the Czech Republic and Japan. The common thread was an emphasis on quality over quantity, and the attention to detail that comes along with craft design and limited production.

NAHBS showcased just about every style of bike you can imagine but particularly well represented were track and road, touring and townie, cargo, tandem, cross country, utility and commuter bikes. Titanium mingled with steel and carbon shared the stage with more ‘traditional’ bike frame materials including hardwood and bamboo. Some builders toyed with lesser used materials including Magnesium.

Suppliers of steel, aluminum and titanium tubes set up next to makers of bike specific production jigs, tools, lugs, dropouts and ‘extras’ like trailers, bottle cages, jerseys and caps.

Bike publications doled out free copies of their magazines (Momentum, Bicycle Times / Dirt Rag, Mountain Flyer) while makers of metal lugs and dropouts exhibited their products in briefcase like hard cases like so much fine jewelry.

All told, this year’s show featured 158 exhibitors and drew over 12,000 attendees, the biggest crowd in the show’s ten year history. This is the third time the show was hosted here in California (it had  a two year run in San Jose in 2006 and 2007).

Seminars were offered on topics ranging from: Bike Building Business Basics to the History and Future of Handmade Bikes and from Fillet brazing to the “Wooden rim renaissance”.

Santa Cruz’s Craig Calfee presented on the Bamboosero, an appropriate technology development project which is spearheading the training of people in Africa to build tough yet refined bamboo framed bikes designed for domestic transportation and cargo use (load of 450 lbs. plus) and also for income through ecological tourism rentals and export sales.

Sacramento was a great venue for this year NAHBS which just happened to coincide with a Beer festival. The show’s “ARTBIKE!” events included: live music, local grub and brews, bike parades and other delicious bike fun.

By far one of the collect bikes at the show, which picked up an award for Best Experimental Design Bike was the super big wheel (32 inch!) mountain bike displayed by Black Sheep Fabrications.

As with every NAHBS this year’s show was flush with fine finishes, smoothly curving racks, tightly sewn bags, classy cycling wear, and over the course of three days thousands of wide eyed and sometimes drooling Bike fanatics.

All photos by Matt Pierle, unless otherwise noted. Matt Pierle is a cyclist from the Great Lakes region lucky enough to be attending bike related events and cycling around the west coast this winter. He can be reached at mattpierle@gmail.com or on Skype at the handle: bikelove.

If you are interested in writing a guest post, send an email to leslie@slobikelane.org , we’d love to showcase your words, pictures, videos, on bicycles!