You are here: Home / Blog / Memorial 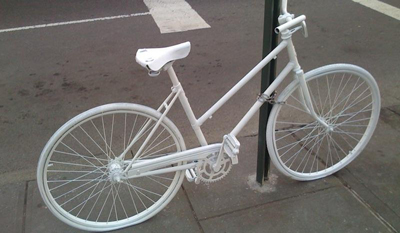 Bike SLO County offers our deepest sympathy to the family of Bridget Dawson of San Luis Obispo, whose inspired life was tragically taken July 14, 2016 by a motorist who drifted onto a wide shoulder where Bridget was enjoying one of her many passions – bicycling. Our sadness is profound because Bike SLO County stands for safety through education of both bicyclists and motorists and by supporting more and safer roadways for all.

Bridget, 58, and her husband, Scott, moved to San Luis Obispo two years ago when Scott accepted the position of dean of Cal Poly’s Orfalea College of Business. They lived and raised their family in Portland, Ore., for 29 years before arriving in San Luis Obispo. Bridget made many friends and became a respected and much-loved member of the bicycling and triathlon community during her short time here.

Bridget was a role model and world-class athlete who ran track and cross country at Iowa State University and discovered triathlons in 1984. She was a professional triathlete during the years of the Bud Light Olympic series in the late 1980s. After taking a break to raise children Whitney and Conor, Bridget again became a serious competitor in 2012 and to her surprise Bridget won her age group and became the world champion for the Olympic distance triathlon that same year.  She won her age group in the United States for Olympic distance in 2015 and competed at world championships many times. She also won her age group for U.S. Duathlon Championships from 2013 to 2016. She planned to do her first Ironman next year, with a goal to race in Kona, Hawaii, where she would have competed as a 60-year-old. Her friends frequently described her “gentle determination.”

Bridget was born Nov. 3, 1957 in Sigourney, Iowa. In addition to Scott, Whitney and Conor, she is survived by her mother, Joyce, and three younger brothers, Terry, Cole and Shawn.

Bridget’s family has created the Bridget Inspires Scholarship Fund to support young women in triathlon and other athletic endeavors. The goal of this endowment is to extend Bridget’s inspiration beyond her achievements and coaching. She raced with grace, confidence, strength and a quiet fierceness that made her a champion in the sport as well as a mentor and friend to the entire community. Her drive and vitality will live through the young women who will be supported from this fund to pursue their athletic goals.

A remembrance for Bridget will be held Monday, Aug. 8 at the World Forestry Center, 4022 SW Canyon Road, Portland, Ore. 97221

For more about Bridget’s life and the Bridget Inspires Scholarship Fund, please go to Bridgetinspires.org.