We just got some more “I Bike” stickers in yesterday, with plans to get more for the other towns within SLO County in the near future. Look for the stickers at our events countywide throughout the summer and beyond!

We are always promoting bicycles throughout the county all the time, check out some of the other stickers in the works on our Flickr page.

Recently, Transportation Secretary Ray LaHood announced a ‘sea change’ in transportation policy: making bicycling as important as driving. LaHood’s statement is representative of what the American people want; alternatives to car transportation and a sustainable future.

But many communities want the opportunity on the weekends and during the week to have the chance to bike to work, to bike to the store, to spend time with their family on a bike. So, this is not just Ray LaHood’s agenda, this is the American agenda that the American people want for alternatives to the automobile.

What’s happened around America is people are buying bikes and they’re using them for recreational purposes on the weekend and there’s no better family way for people to spend a weekend than riding their bikes on these biking trails.

In his interview on NPR’s All Things Considered last week, LaHood spoke of the initial investment we made in our advanced highway system over 50 years ago, and how if the same energy was put towards any other mode of transit, we would be connected in a variety of ways. Shifting attention towards alternative forms of transit can help provide options for everyone.

With an increase in bicycle transportation, we can see a decrease in the number of cars on the road, thus alleviated congestion along crowded vehicular corridors, providing a win-win for both modes of transportation. Less than 10% of the country uses bicycles as a primary mode of transit, but as we increase bicycle facilities, these numbers will continue to rise.

We know that 90 percent of the people aren’t going to be cycling to work, but that opportunity and that option and that kind of alternative is something we think people want.

The mentality of “if you build it they will come” can be directly applied to the future of bicycle infrastructure throughout our country. Here at the Coalition, we are working to make projects like this a reality in SLO County, join in our efforts by becoming a member of the Coalition or volunteering for our events throughout the year.

An image showing the same number of people in single occupancy vehicles, a bus and bicycles. Look how much less space the bicycles take than the cars!

Located in a courtyard in Milan, this show was a side show to the 2010 Milan Design Week. All these bikes are “found” 19th century gems.

If you like stuff like this, be sure to check out what the Bike Lane Gallery is up to during this year’s Bike Month! Bike Month takes place in May throughout San Luis Obispo county: 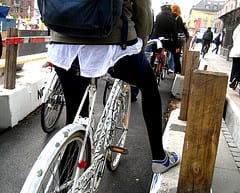 Copenhagen has always been a famous city for bicycling, no matter what the weather is, there are always people out on their bikes getting around the city. The city is full of cyclists who have their own unique ways of waiting at a red light:

Some cyclists will be able to rest even more comfortably at lights now, thanks to low-tech additions by the City of Copenhagen. These rails are simple solutions for making stopping at red lights more smooth, and act as an effective way to make bicyclists seen at busy intersections.

The bottom portion of the rail reads “Hi Cyclist! Rest your foot here… and thanks for cycling in the city.” a nice reminder to encourage cycling for everyone. Kudos to Copenhagen on offering uniquely simple and detailed bicycle facility for its residents.

A while ago, the Coalition had encouraged our members and supporters to sign a petition to Google, asking them to add bicycle directions to their popular mapping features. Today, at the 2010 National Bike Summit in Washington DC, they announced the launch of the newest Google Map feature!

This video shows how you can make it work for you:

Congrats to Google for listening to what it’s users had to say, and implementing a great feature to it’s maps! A special shout out to everyone who signed the petition requesting the bicycle directions too, it worked!